How to remove Brackets from Toyota Highlander Liftgate Lift Support.

During this period Toyota had supports manufacture in Japan from a company called Showa, and also the USA from Stabilus.  The supports that were made in Japan were supplied with the end brackets permanently crimped on so as not to allow removal.  The Stabilus supports have a U shaped metal band on the end and they do release.

Do to the high cost of the end brackets and also the confusion as to where they were built we offer the supports as stand alone and also a bracket kit as an optional purchase. Kit PM0005, please click here to order.

Removal of the brackets from the permanently crimped ends requires cutting the actual ball socket in half using a Dremel, hacksaw or cutting wheel.  Once the end has been removed you will have a 10mm ball stud that will attach to the new supports.

Information below was provided by one of our customers who has an infiniti fx45 which has the same issues as the Highlander.  Pictures below are a reference only and are not from the Highlander.  We would welcome any input, pictures etc from your experiences with this model. 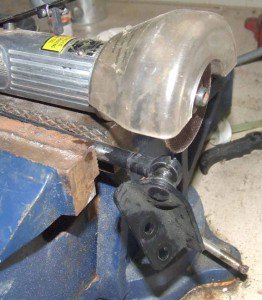 I used a cut-off tool to split the socket. The socket material was fairly thick and tougher than I expected, although it cut easily. It had to be cut substantially through and all the way around the socket before it would break away. The trick was to cut almost through without scaring the ball. Since the strut will be discarded, I just clamped down tight with the vise. All we’re trying to save is the bracket and the ball. Note some have simply ground down the ball socket using a bench grinder. Eye Protection is a must when doing this.

In this photo you can see the cut is broken through in several places. I used a cold chisel and hammer to crack away half of the socket. 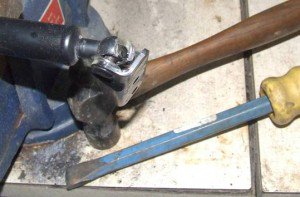 In this photo the socket is cracked away and the instruments of persuasion are visible. 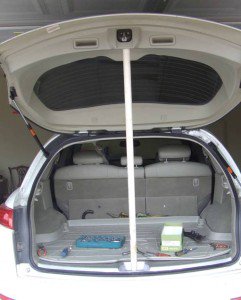 I used a piece of plastic pipe to hold the lid up. Before the RH strut was removed I clamped a Vise Grip pliers on the old strut cylinder to support the lid as well. After the second strut was removed, we depended on the new strut (no vise grips of course) and the plastic pipe. The lid is very heavy and would do serious damage to your head and neck if it fell please make sure your prop is well in place!
I connected the cylinder end of the strut to the bracket and then bolted the bracket to the body.  I bolted the lid bracket to the lid. Then I pushed up on the lid and slipped the piston end socket onto the lid ball.
The hatch opens and closes perfectly. It opens firmly; the struts ease it up so it doesn’t slam to the limit. It takes a strong but reasonable pull to bring it back down. The over-center design lets it close firmly but gently.
It took me less than two hours to complete the job including time for photography.
×